All Italian for this post’s title, because this is a 100% Italian tradition, at least as far as I know ;)

When autumn comes it’s chestnuts season, castagne! You can see fruiterers popping on the side of the streets and in the city’s main squares, setting up a nice fire and cooking chestnuts with the typical punched skillet. They throw them high, high in the sky and catch them all as gravity does its job. People line up to buy a bunch of caldarroste (roasted chestnuts) wrapped in a paper cone.

Did that title say vino? It did! Roasted chestnuts are usually accompanied by vino Novello, “Italian for young wine” -I am citing wikipedia here- “is a light, fruity, red wine produced throughout Italy”. Vino Novello is available around the beginning of November and is supposed to be consumed within a few months, it is not an aged wine. 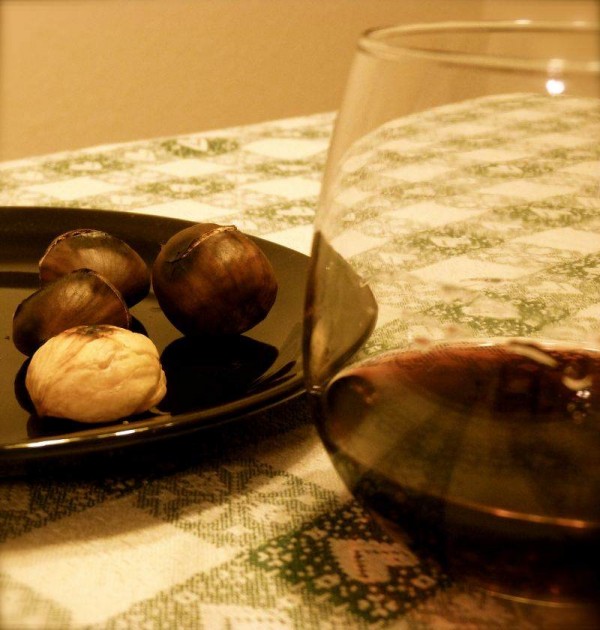 In the U.S. I can find chestnuts at Publix, but they are well hidden I tell you! You will have to ask for them! I am sure most of the specialty grocery stores carry them too.

My fiance and I usually realize it’s chestnuts time around Thanksgiving, and rush to buy them before they are gone! This year we decided we should do it right and get the vino Novello as well :) Sadly we could not find it but we found Beaujolais Nouveau, its French cousin. I have to say it did its job enhancing the flavor of the chestnuts and bringing us closer to home for a little while.

While chestnuts usually are fire roasted, you can do them at home using an old skillet and a little patience.

Cut the surface of the chestnuts on the round side, perpendicular to the tip, 3/4 of the width, as shown in picture 1.

Cover a bowl with a kitchen towel and put the chestnuts on top of the towel, wrapping them well. Let rest for about 10 minutes.

Now you are ready to eat them! pour yourself a nice glass of wine, grab a few chestnuts, leaving the rest wrapped, peel them and enjoy!! The inner skin of some of the chestnuts won’t come off and will turn you crazy, but most of them peel very easily and they all taste delicious! 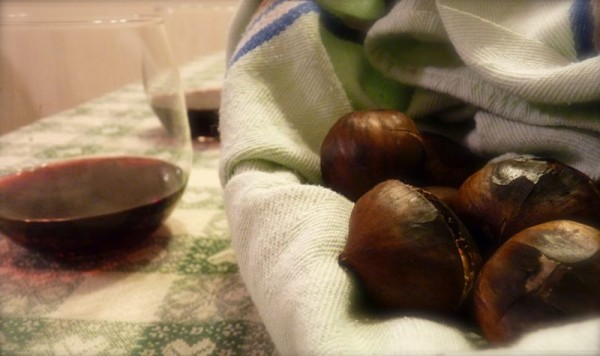 Yesterday I enjoyed my chestnuts and felt a bit home even though Florida gave us a fantastic Sunday with 82°F (28°C) and I was eating them wearing a T-shirt with the porch door wide open :D

Leave a Response to Waylon Bouchard