You are here: Home » Pasta » Happy Befana and Casunziei from the Dolomites

Happy Befana and Casunziei from the Dolomites

In Italy we have the tradition of epiphany on January 6th.

The night of epiphany an old lady called Befana and dressed in old clothes stops by the houses and leaves a stoking full of sweet treats for the good kids and coal for the kids that misbehaved. Every year the Befana (aka my mom) used to put a small piece of fake coal (made of sugar) in my stoking xD The stoking from my grandmothers was only full of sweets instead ;)

The Befana is considered an antagonist of Santa, or sometimes Santa’s wife ;)

Here is an italian rhyme for the old lady:

The Befana comes at night
with the shoes all broken
with the skirt full of patches
hurray, hurray the Befana

This year my mother-in-law and aunt-in-law came to visit the day of epiphany, as always they are very thoughtful and brought us bags (instead of stockings) full of treats, sweet and savory, since we are all grown up now :)

One of the tastiest thing they brought is Casunziei from the Dolomites, more specifically from Padola, a small city (village?!?) in the Veneto region of Italy, close to the glitzy Cortina.

Casunziei are a kind of stuffed pasta typical of the Dolomites. They are shaped as half moons. There are red, green and yellow casunziei, respectively stuffed with beet and potato; spinach and chives; potato and speck.

I prepared the cazunziei for dinner following the very simple traditional recipe. 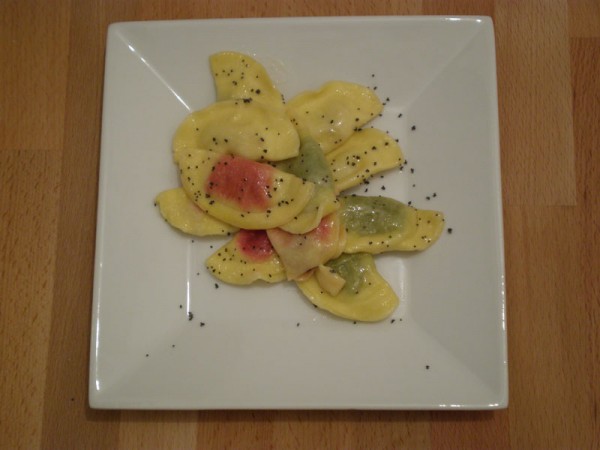 Bring a pot of salty water to a boil. Add the cazunziei and boil for few minutes.

Melt some butter in a skillet.

Drain the casunziei and toss them in the melted butter.

One Response to Happy Befana and Casunziei from the Dolomites