Last Thursday while walking home after a lunch date with the hubby I saw the stalls of the market in my neighborhood. Since it was a sunny day I took a slight detour and walked through the market. I was delighted to find quite a few stands selling cheese, many selling vegetables and fruit, some selling meat and charcuterie, a few selling Turkish bread and olives along with all sorts of Turkish dips, but what really enthralled me and made me go back this Thursday is the seafood stall! 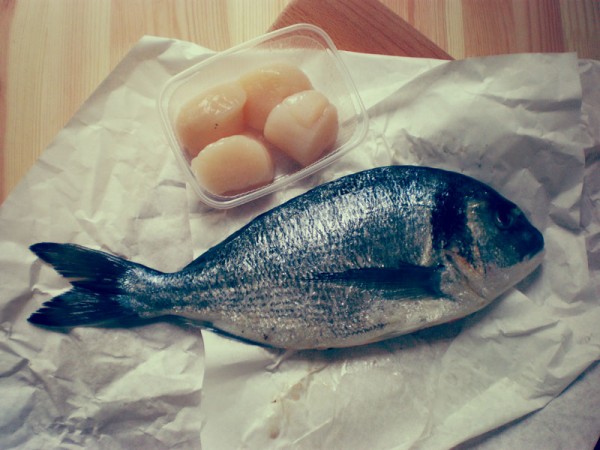 I went, I saw, I conquered

I have been looking for a place selling seafood (both fish and shellfish) since I moved to Berlin. I had found seafood only at the food department at KaDeWe and at the (very nice) supermarket in the basement of Alexa shopping center. Seafood at KaDeWe comes at KaDeWe prices!! And Alexa is on the opposite side of town! Regular grocery stores don’t sell seafood and I haven’t seen any fishmonger around town (aside from Nordsee that sells not more than 2 types of fish plus shrimps, mainly frozen, and is a food chain, you know how much I hate food chains, don’t you?!)

Last Thursday was a big revelation: where do you find seafood in Berlin? At your local market! Just find out what day it is held! Or go to the huge market at Winterfeldplatz on Saturday.

So, excited about this revelation yesterday I happily set out to go to the market again to pick up my fish=dinner, but not before calling my mom to ask for suggestions on a good fish and how to prepare it.

She suggested several types of fish which will all be delicious but the hard part was to find a corresponding fish in Germany/German. I know I will like them if she recommended them but I have no idea how they look so at the market I have to have their names, and the names have to be in German!

Fishes that supposedly correspond (share the same name) can be quite different depending on where they grow (Mediterranean Sea, North Sea, Ocean…) so they may not match exactly from one country to another. They can change in color, size and sometimes also slightly in their shape. So even if you know how they are supposed to look like you may want to also find out the name.

The list below is useful for me for future reference, but I am also writing it for you in Italian, English and German so if you are travelling and want to order some good fish, by checking this list you will know what you are eating! Although sometimes you don’t want to know what you are eating when you are abroad :P But if it’s on the list it’s a GO.

I came home with a sea bream (orata or Goldbrasse) and the ingredients my mom suggested to bake it with: cherry tomatoes and good black olives. 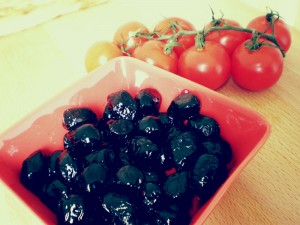 I decided to serve an appetizer of grilled scallops (capesante or Jakobsmuscheln) and got some Turkish Pide bread to go along with the fish. Yes, the bread is HUGE! I got the thinner elongated one instead of the round thick one. 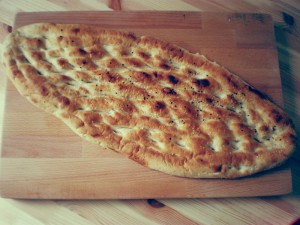 And finally, the strawberries (fragole or Erdbeere) looked so good and smelled even better that I had to buy some, the seller said they are lecker, delicious! 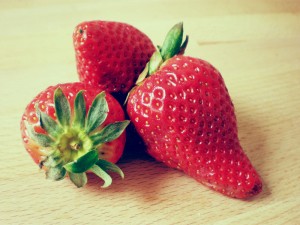 A piece of bread “went missing” as soon as I got home… I had to make sure it was good, right?

Did I tell you how much I love Berlin? Well I’m telling you again: a lot!

The recipe for the fish will be on BeyondPasta soon!