With a couple of trips following each other at a very short distance (one week home and I was already on another plane), I am still dreaming of the amazing chocolate I ate in Switzerland (Chocolateland), but I must go in order and first tell you all about the fresh flavorful food I had in Greece, or more exactly, in Crete. 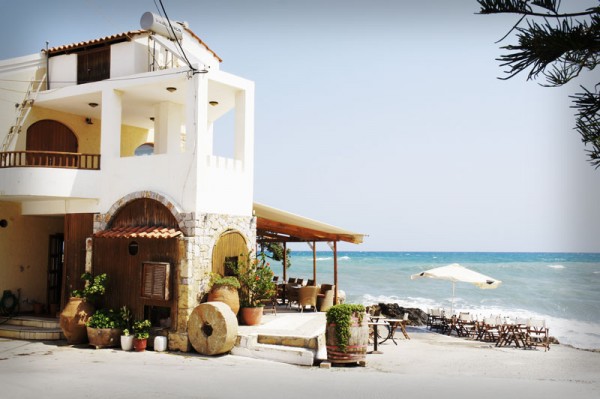 We enjoyed the much needed heat, try to live in Berlin for 9 months and only then we can talk about the need for heat. We enjoyed the sunshine, we enjoyed the really blue, really transparent sea, and the rocky beaches (I haven’t seen a single shell, so strange!). We also enjoyed the wind, actually what in Berlin I would call wind, and shiver at the thought of it, in Crete I would call sea breeze, even though it spoiled one of our days not allowing us to go on a cruise we had planned and were really looking forward to :( So in that case, we can call it wind ;)

But let’s move on to the main subject of BeyondPasta, the thing you are all waiting for: my usual reportage on the food! 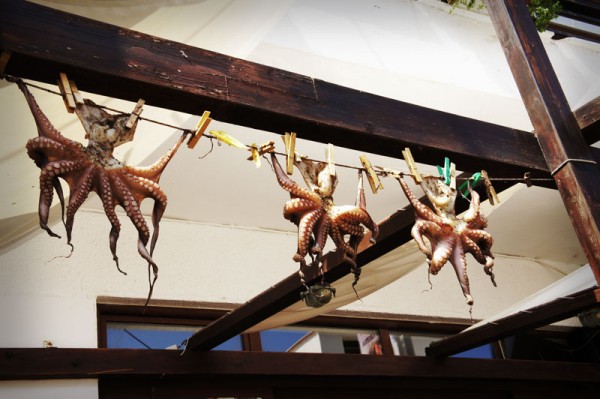 Everything was delicious, I am now raving about Greek food! I have always been fond of Greek food, but now I am in love! Souvlaki, gyro and saganaki on top of my list. The first I made many time (Souvlaki recipe, approved by my Greek friend), the latter just a few (Saganaki recipe) and gyro, never made but ate so much of it! 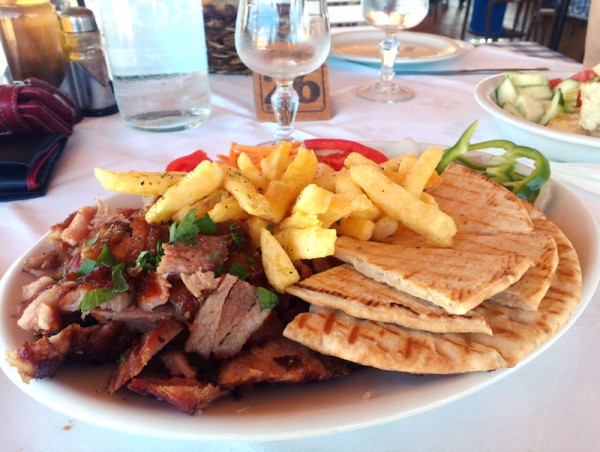 Here are some of the things we ate the most in Crete.

Apparently the Cretan salad is not a greek salad! Here is the difference: Cretan salad is made of tomatoes, feta cut in cubes, olives, olive oil, and oregano; Greek salad is a Cretan salad with the addition of sliced cucumber, green bell pepper and red onion. No lettuce, delicious! We had one of the two every day, both for lunch and for dinner!

Feta and many other cheeses

I don’t know the names of all the cheeses we ate, but we had many. I recognized feta of course, with it’s tangy flavor that goes great with vegetables, and some other cheese similar to feta. All the other cheeses where generally mild and just slightly soft, far from the many matured cheeses we have for example in Italy, or all the spreadable cheese that you can find in France. These cheeses were all easily palatable, no strong flavors.

We had fish in all its forms. There is one lunch that I will hardly forget, and the casualty with which we reached this amazing restaurant adds to the amazing meal we had. We were driving around a bit at random when in Kolimbari I saw someone bringing crates of fresh fish into a restaurant. I told the hubby that we HAD TO have lunch there! The restaurant was called Argentina, and I would go back tomorrow if I could!! You could order a la cart but we decided to accept the offer to walk to the kitchen where they showed us what fresh fish they had and explained us how it could be prepared. Super! We had a small (huge!!) mix appetizer. Then I had a soup, wich came in the form of broth (made with wine), and steamed fish and vegetables. I cleaned the fish and added what I wished to the broth, it was incredible. The hubby instead had grilled fish, and he loved it too. 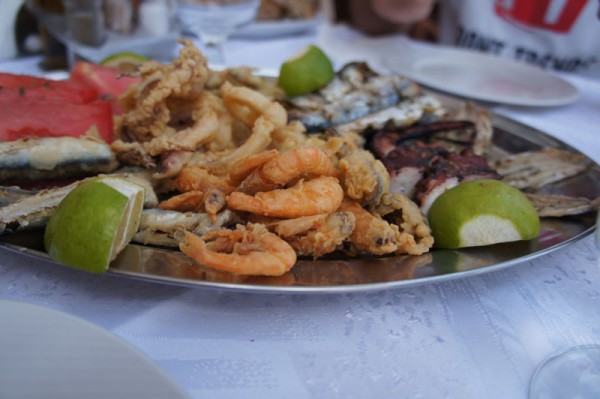 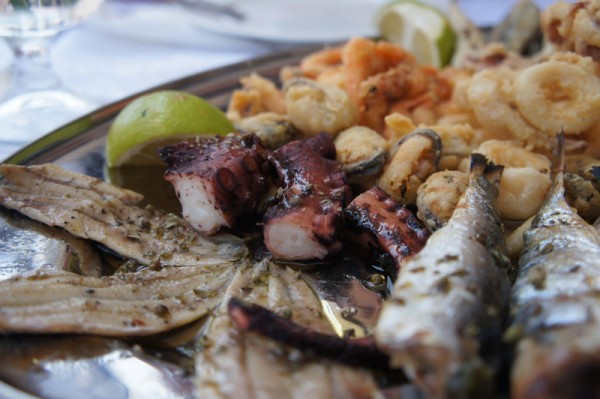 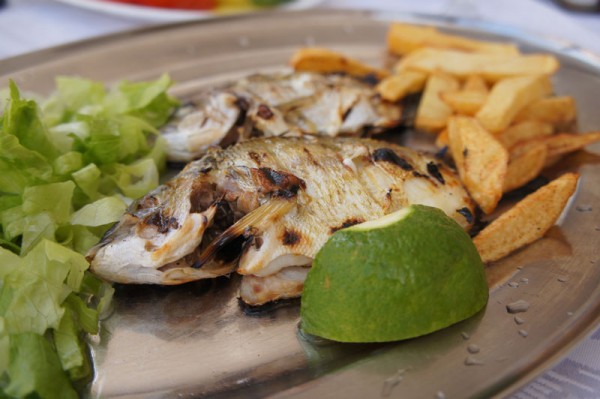 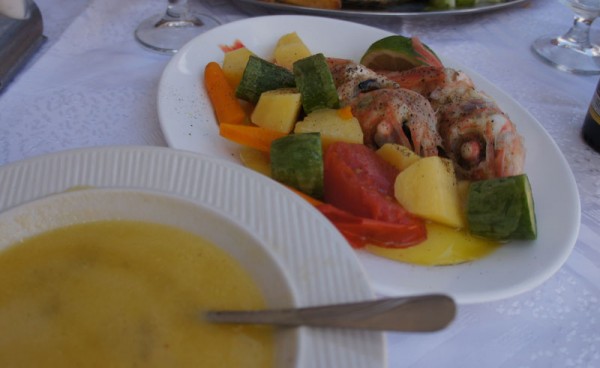 Take a cretan salad, grate tomatoes and feta instead of cutting them in chunks, and lay all the ingredients on a slice of bread (a large round dakos, barley rusk). There is your dakos, or ntakos. I have to admit that I didn’t like the barley rusk. But I loved Ntakos when I had them with regular bread.

Ouzo is an anise flavored liquor. We had it in all forms and shapes. Ouzo was omnipresent in Crete, it’s like espresso in Italy! And they offer it in many forms, my favorite was Ouzo Orange, ouzo and orange juice.

Raki is another liquor we tried. Very similar to grappa (the italian liquor) it didn’t win a place in my heart.

And greek beer: Mythos. This was quite palatable, and the name is great! 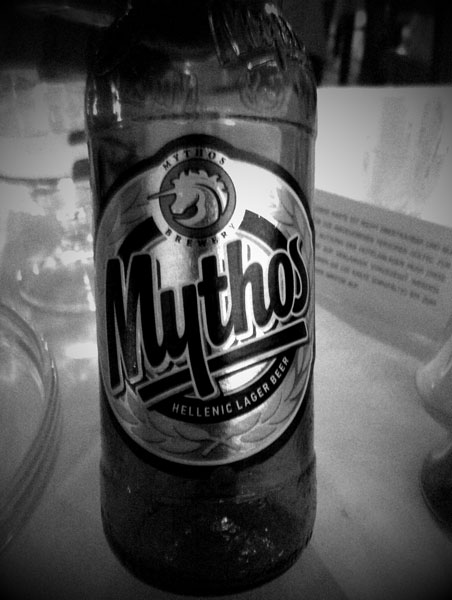 And finally all the fruit and vegetables were so fresh, ripened just right and tasted so good, I guess the climate makes them thrive. One thing that made me slightly sad is that driving around the Island we saw lots of trees bearing fruits, just left to themselves, with the fruits just falling to the ground and smashed by cars and people. This also made me miss my childhood house in Italy, with lots of fruit trees. I remember picking up apricots and black and yellow plums all summer long, my mum making preserves and preparing crates of fruit for the neighbors because we just had too many for ourselves. That is what I call life, and I miss that more every day I spend in an apartment. 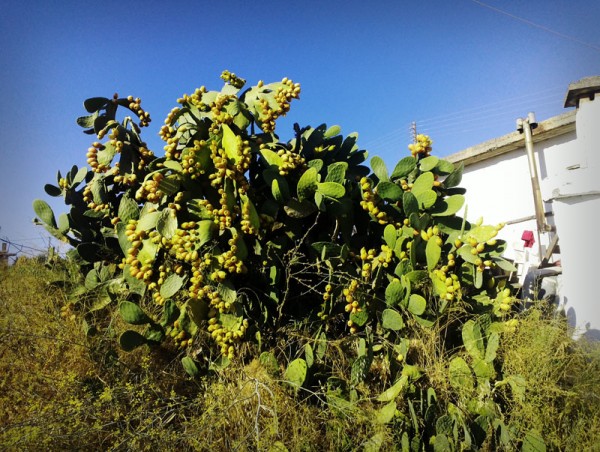 No more food and on to our trip. Renting a car is a must in Crete if you want to see something. Driving around felt like the combination of driving in the mountains, with tons of hairpin bends, and being on a boat, with potholes all over! It wasn’t fun! But I have never seen a scenery so beautiful!

I had a list of the top 3 destinations I wanted to see in central/western Crete, but sadly due to the strong wind we got to see only one of them. In any case here is my top 3:

Matala was a famous destination for hippies in the 80’s and it still maintains that flavor. It’s a beautiful very small town, and the beach is breathtaking! The only problem is that it is really famous and therefore really packed! If you are a little more adventurous you can go to Red Sand Beach. It’s just across the street from Matala beach. Take a short walk, hike on top of the mountain, hike down the mountain and there it is! And when I say hike I mean it. That was hard! It was terribly hot, not a breath of wind, big rocks all over, and you have to hike considerably high before descending to the beach. But it was really beautiful! 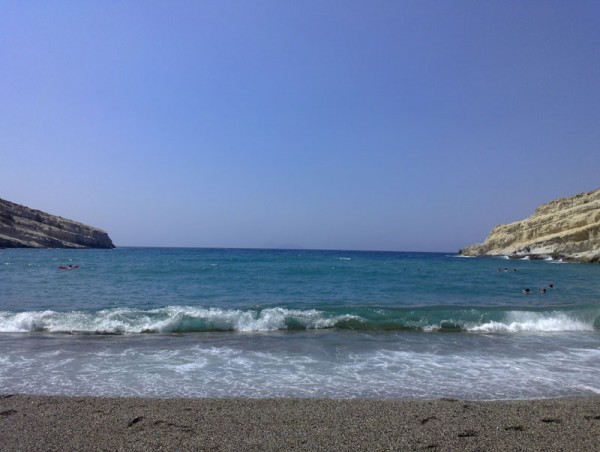 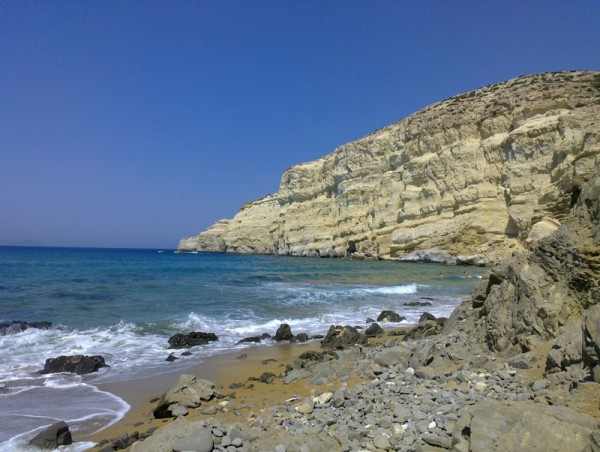 Drive there with a 4×4 car (there is a stretch of dirt road and regular rental cars are not insured for driving on dirt roads), or take the Gramvousa Balos Cruise. The cruise was our chosen method to reach Balos, it sounded like a wonderful day, we were really looking forward to it. But the wind was so strong that they were not going to have any cruise that day (or the following days). We were very disappointed, especially given that we drove for almost 2 hours to get there. If you plan to go, give them a call first!

Another incredible stretch of beach. An island that you can reach on foot when the tide is low. Elafonisi is located on the south west corner of the Island of Crete. Another day of really strong wind ahead of us and the locals suggested us not to go there because it would not have been pleasant and the drive was really long.

What did I like the most? Being on the beach surrounded by mountains and driving on top of a mountain and finding that far far below it drops into the sea!

What keepsake did we bring from Crete? Shot glasses :P for the ouzo of course :) 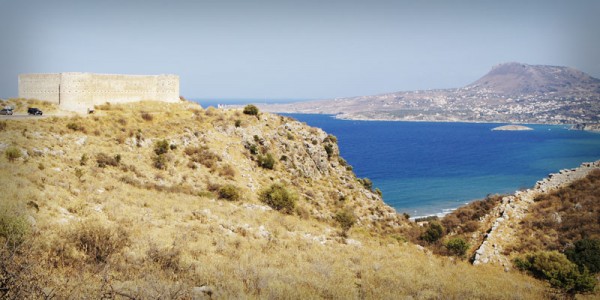 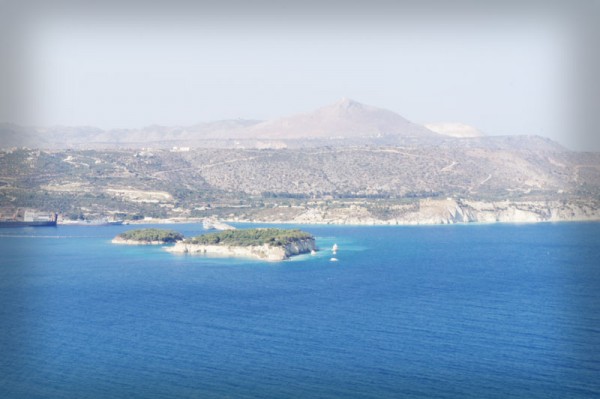 One Response to Crete – Greece