I had to make up a name for this cake, and that was hard! You may ask why doesn’t it have a name. Well, this is one of the beloved recipes that reside in the kitchen drawer, and when I say “the” kitchen drawer, I mean the one back home, in Italy, in my mom’s kitchen :)

When I used to ask my mom for the recipe for this or that, she would always answer with “just look in the kitchen drawer”. That drawer contains a folder (more like a bag) full of tested and approved recipes. These recipes have different shapes, they may be cut out from a magazine or scribbled on a piece of paper or given by my grandma or by some friend, but no matter their appearance those recipes are all a keeper! 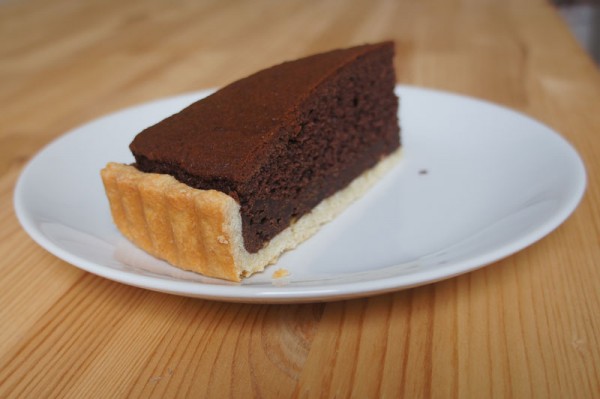 The recipe for this cake came in a small piece of paper, it was scribbled quickly, and quite frankly it was a bit of a mess, I can picture my mom scribbling down all the information she needed to make it while a friend was describing her the steps. And guess what, along with the messy instructions there was no name for this cake. My mom scribbled along the side something like 3 layers chocolate cake. But this is not a cake, this is a crostata, a pie. It kind of does have three layers though, and two of them are made of chocolate, but it’s not a cake. Well, the top part is kind of like a cake. It’s a cake inside a crostata (mouthwatering allowed). Oh well, the name has been assigned now, so no more rambling on about it, this is a 3 layers chocolate crostata!

I wrote down this recipe in one of my trips to Italy, but never backed it because the instructions were such a mess that I didn’t dare to try, I thought for sure something was screwed up. But this time I felt inspired, I thought it had been there, untouched, for too long, plus I seemed to remember it tasted amazingly, you know, there is a reason if it is in the kitchen drawer ;)

So here is the recipe, finally in order and hopefully the steps are clear. The result is a very strange crostata, really it’s as if it has a cake inside, but I am not complaining ;) on the contrary. It has a nice taste of rum, but feel free to substitute rum for your favorite liquor or skip it and use milk instead. 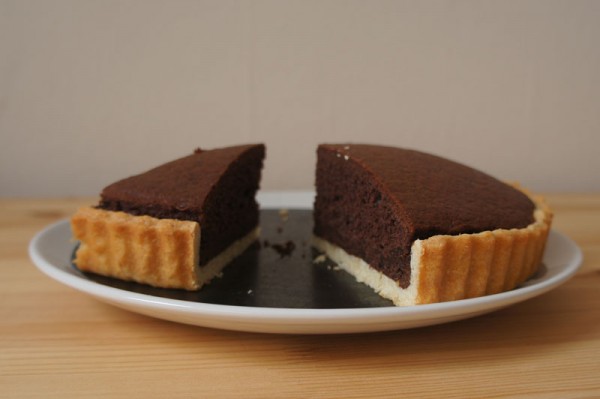 Start by making the pasta frolla, short pastry dough, following the usual instructions and doses. In short: sift the flour in a large bowl, add the butter cut in small pieces, let the butter warm just a little bit at room temperature. Work the butter into the flour with your fingertips until it feels like sand. Add the sugar and stir. Add the egg, egg yolk, a pinch of salt and a dash of brandy. Mix quickly, form into a ball, wrap in plastic and transfer to the fridge.

Start by melting at very low temperature the chocolate with the nutella and butter. Remove from heat and let cool.

Beat the egg with sugar until it is light and fluffy (Picture 1).

Add the flour and stir well.

Add the chocolate mixture (Picture 2), stir and set aside.

Setting up the crostata (pie)

Butter an 11″ pie pan. Roll the dough. You can use the trick of rolling the dough on top of the plastic wrap and turn it upside down to line the pan and peel off the plastic (Picture 3). Cut the extra dough from the sides, and prick the bottom of the pie with a fork (Picture 4).

Pour the batter you made earlier, the first chocolate layer, and spread it on the bottom. 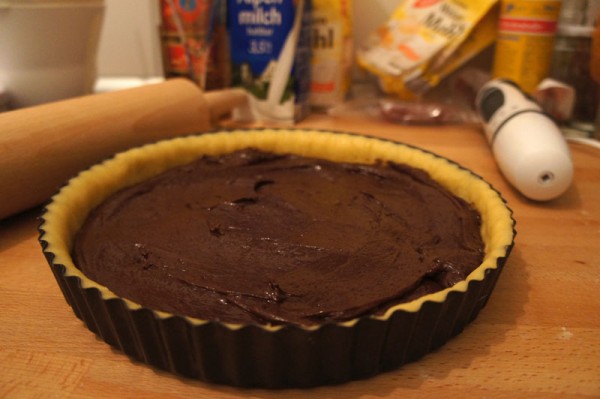 Cut the butter in small chunks, transfer to a large bowl and let it warm at room temperature.

Add the sugar, vanillina or vanilla flavor, a pinch of salt and beat to a cream (Picture 5). This is much easier with margarine but I prefer butter. Really keep at it, you don’t want lumps of butter.

Add the eggs, one at a time, beating well before adding the second one and beating well again before continuing.

Add the milk and the rum and stir in.

Mix together flour, starch, cocoa and backing powder, then add to the cream and stir well (Picture 6).

Pour the second chocolate layer in the crostata and spread evenly. 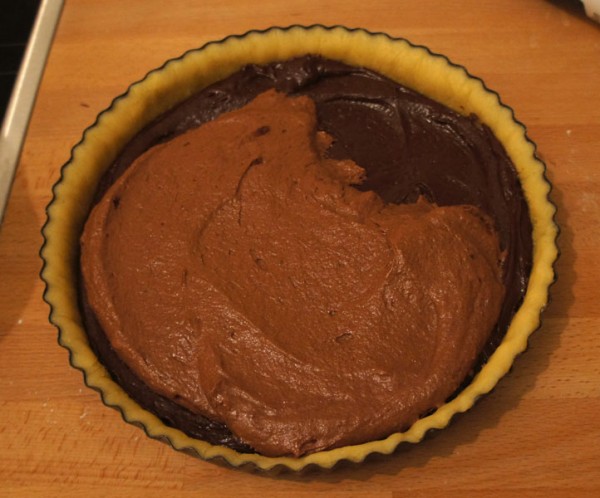 When cooled you can dust with powdered sugar and/or cocoa. I like the contrast between the white frolla layer and the chocolate on top so I didn’t. The dome made by the second chocolate layer is so pretty! 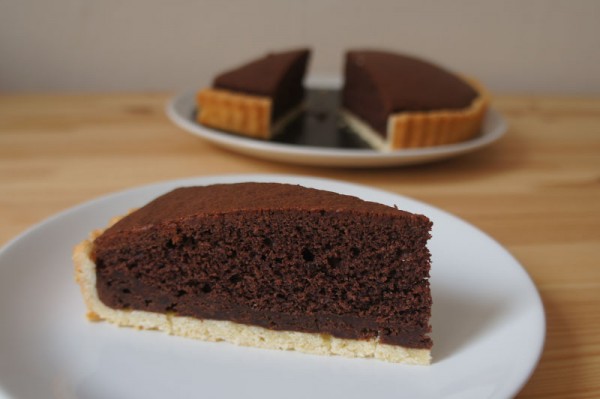 Do you want to know what other recipes are in the kitchen drawer? A number of them are already are already on the blog, take a look for example at my favorite cake: the walnut crostata, or the mars cake, or the apple cake, or the carrot cake… Inseparable, unreplaceable delicious recipes!