Ragù, with the accent on the u at the end. That is how every Italian calls Bolognese sauce, or meat sauce. Ragù is originally from Bologna, and that is why it is known as Bolognese sauce, and is made of tomatoes and meat, so meat sauce is a good name too. Plus technically ragù is a class of sauces, it can be “alla Bolognese” or “of rabbit” or “of boar” and many more. But for every italian ragù, with nothing else appended to the name, is the sauce from Bologna, made of tomatoes and ground meat. 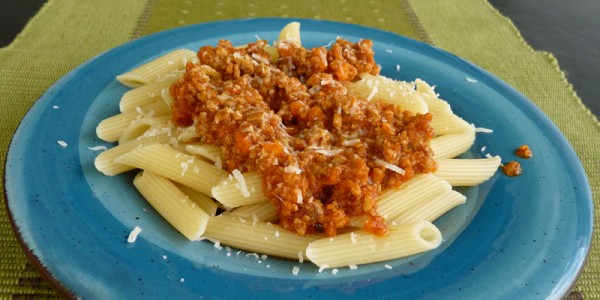 You can use ragù as a sauce for pasta. The picture above was an attempt to make my pasta plate with ragu look “the american way”. But I have to admit it just looks wrong to me! The pasta is supposed to be well coated in the sauce. That is the reason why pasta with ridges is so much better than the flat one (for example penne rigate vs penne lisce), because the ridges capture the sauce. Spreading the sauce on top just doesn’t cut it for me! But back to ragù.

With ragù you can make the simplest lasagna, and the original one, lasagne alla bolognese, again this version of lasagna in Italy is simply calles “lasagne”. Lasagne alla bolognese are made with layers of pasta, ragù and besciamella sauce and the usual abundant grated Parmigiano Reggiano (Parmesan cheese).

Ragù, bolognese sauce, is the mother of all sauces. It goes well with all the shapes of pasta, no exception, but it is especially extraordinary with fresh pasta cut in long ribbons like tagliatelle or pappardelle. Top it all with some parmesan cheese and serve a tasty authentic Italian dish.

When I make ragù, bolognese sauce, I make a lot of it and then I freeze it in jars. This way when I want to make pasta with ragù I simply grab a jar from the freezer. I either get the jar out in advance and let it thaw at room temperature or I toss it in the microwave for few minutes. Very easy and convenient. I will have to admit that I have never bought bolognese sauce. They just don’t look right. 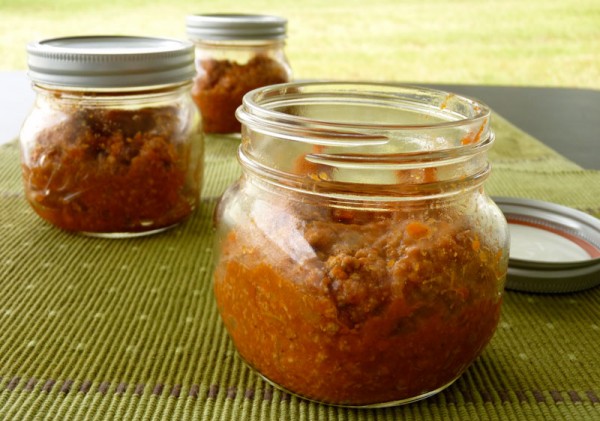 As ragù, bolognese sauce, is so widespread in Italy, and has been around for so long, you can imagine that almost everyone has his own recipe, plus there are several regional variations. My recipe is simple and full of veggies, with carrots to gives it a pleasant slightly sweet taste. 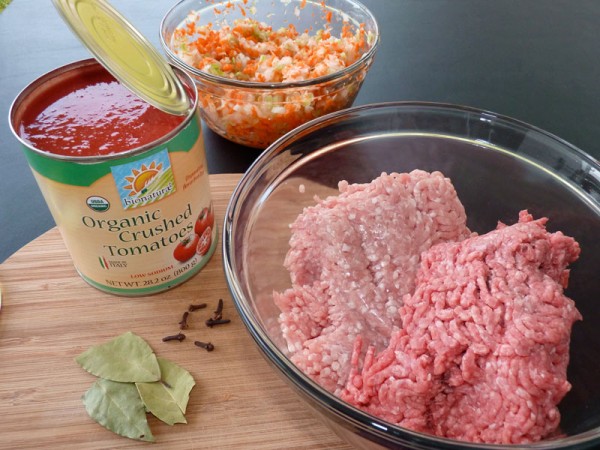 Remove the hard filaments from the celery, then cut it in small pieces.

Peel the onion and the carrots and chop thinly (I use a food processor).

Pour the olive oil in a large pot. Add all the vegetables to the pot and saute for 10-15 minutes. Saute over medium heat, with the lid on, stirring a few times until the vegetables are soft (Picture 1).

Add the ground meat and cook, stir a few times until all the meat looks cooked and is not pink anymore (Picture 2).

Add the cloves, the bay leaves, the strained tomatoes, the salt, black pepper to taste and a pinch of nutmeg. Mix well, cover and bring to a boil. When it starts to boil, lower the heat and leave to cook with a gentle rolling boil for about one hour.

Finally remove the lid, stir, and check if it needs to boil some more without the lid to thicken. It’s a matter of taste, there is no right or wrong thickness. 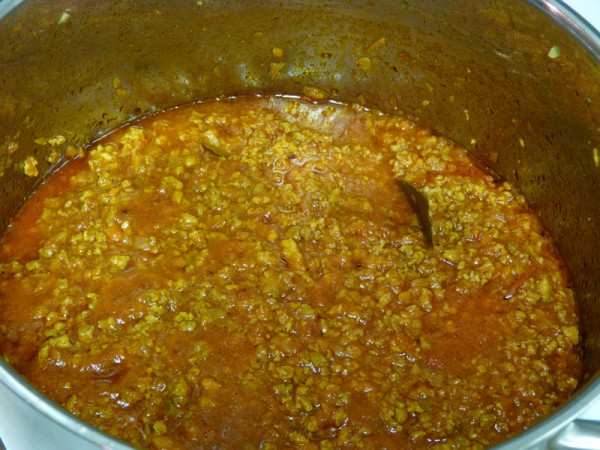 Consider that if you store the ragù, bolognese sauce, in the fridge or you freeze it before using it, it will dry a little so let it runnier than for immediate use.

Taste the ragù, bolognese sauce, and adjust salt if needed.

All done! When I make ragù, I also usually immediately make a lasagna.

I store the leftover ragù, bolognese sauce, in jars, and when it has reached room temperature I transfer it to the freezer.